A Brief History of Ashmeadow by Dennis Bradbury

The early history of Ash Meadow House, as it was originally known, remains somewhat of a mystery requiring more in-depth research. However, I make so bold as to make some suggestions. The recently altered and extended property, now Ashmeadow House, is known to date from around 1819, being developed by William Berry a wealthy business man with interests in the Kent Estuary shipping trade. The article in a Lonsdale Magazine of 1822 confirms this and includes an etching of the house at that time, showing substantially the same front profile as still exists in the present refurbished property and describing it as having an orchard in front. Sparse information indicates the previous existence of an 18th century dwelling and inn on the site. This existed, largely ruinous, built into the face of the slope, until the developments of 2004. Was this a smugglers' retreat? When the buildings were removed in 2004, the side of the cliff face revealed a well-built stone-lined passage going in several metres. This must have been accessed from the lower floor of the dwelling. Now closed off and used as part of the cliff drainage system, its existence remains a mystery. It has to be assumed that access to the property would be along the shore. A path from Silverdale Road would be crossing farmland, probably belonging to the Burrows family, at this time. It is suggested, by architectural historians responsible for the House's listing, that a more substantial dwelling was built on the site prior to its acquisition by William Berry in 1800. It is fairly certain that the rear part of Ash Meadow House (as named by Berry) was more of a late 18th C. farmhouse type when compared to the obviously Georgian front, which has had to be retained in the restoration.

William Berry had interests in the Estuary shipping trade and was obviously an importer and exporter of some standing in the area. His large warehouse still stands, in parlous state, on the back road at Sandside. The nature of his new development indicated that his business was a prosperous one. More in-depth research may show that, initially, he acquired the older property of about 1790 and as money became available he had the main Georgian front added, with a connecting link to the refurbished, older building. Certainly, by about 1820, the new house was well established as a gentleman's residence with a large landscaped garden. Part of the development was the construction of a tree-lined, metalled, coach driveway from Silverdale Road, where the Coach House was situated. The latter remains as the three dwellings of High Bank. 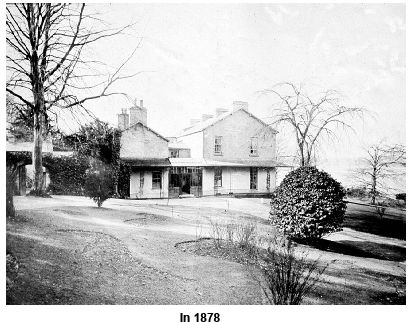 The Lonsdale Magazine shows that William Berry was in occupation at the latest in 1821, He is recorded as being the occupier in 1828 but by 1839 the occupier is James Dickson, his son-in-law. The 1841 census indicates that James Dicksonâ€™s father, William, was the occupier. Successive census returns show occupiers to be Thomas Rodick senior in 1851, Thomas Rodick junior in 1861, John H. Butterworth in 1871, T.E. Askew in 1879, and John Pyke Wilson in 1881, 1891, and 1901. The House was bought on by James Martindale Barnes in 1918 following the death of Wilson. During the period between 1815 and 1878 the successive owners managed to acquire large areas of land and properties in the centre of the Village. Further investigation may show that most of the land was acquired, at the outset, by William Berry himself. Suffice to say that at the Auction Sale of 1879, John Pyke Wilson acquired Ashmeadow, Wood Close, Morecambe Cottage with its adjacent buildings (now Springfield, Rose Cottage, etc.), and all the land between Ashmeadow and Silverdale Road up as far as the estate Lodge and Stable Block.

Wilson retained the Ashmeadow Estate in its entirety. He sold off the other existing properties and created shoreline building plots and, eventually, the shore-side entrance to his own estate. Over a number of years he proceeded to develop houses on the west side of Silverdale Road and to create Ashmeadow Terrace (later Ashmeadow Road).

In 1918 Ashmeadow became an extension to Earnseat School for Boys. The school had been started in 1900 by J.M. Barnes, at Earnseat House. The latter, a Victorian property, still exists, as Tankerfield House, among the Promenade shops.

The small school was successful and quickly moved to larger premises at Inglewood (now Heron's Reach) on the west promenade. The house was renamed Earnseat. The school continued to succeed and soon expanded into the adjacent property, Merlewood, now known as Inglewood Court. The acquisition of Ashmeadow with its extensive grounds allowed 'Jimmy' Barnes to follow his keen interests in cultivating ferns and fruit trees. The walled garden, under the dedicated care of Judd, the gardener and caretaker, produced good crops of vegetables and soft fruit for the school kitchen, especially important during the years of food rationing when two large hen runs also provided eggs for the school. The house provided space for the classrooms while Earnseat and Merlewood were kept as the residential accommodation. The school's facilities were improved by the addition of a gymnasium (demolished in 1998), a hard tennis court, two fives courts and a swimming pool in the grounds of Ashmeadow. The pool was filled from the estuary at high tide by a very temperamental pump located in a pit close to the sea wall.

John Barnes had taken over from his father in the 1940s and, joined by his wife, Dorothy, continued to run the very successful education establishment until eventual retirement in 1968. The school remained open for a further 10 years under new headmaster, Mr. Cleveland. John Barnes died in 1990. The closure of the school, in 1979, saw the whole establishment lie empty for a few years until, in the early- 80s, it was leased to Lakeland Training Ltd. This was an adventure-training establishment for the benefit, largely, of older teenage children from the northern inner cities. The group was to over-reach itself in establishing the New Directions Foundation and developing Operation Innervator. The latter was a scheme to use converted doubledecker buses to take adventure training to the cities rather than vice-versa. One way or another, Lakeland Training went bankrupt in 1990. All moveable assets were sold and once again the properties remained empty and unused though the lease remained intact.

In his Will, John Barnes, effectively, left most of the original education unit to a trust to be known as The Barnes Charitable Trust. While the Lakeland Training lease remained in place the trustees had only perfunctory access to the rapidly deteriorating premises. From 1990 to 2003 the executors and trustees, having eventually paid for surrender of the lease by using the equity in Earnseat and Merlewood, were left struggling to find a practical use for Ashmeadow. The Trust was left with little or no money. Several attempts at leasing the house were to end in failure. Only in 2003 was the Arnside Abbeyfield Society in a position to buy the house and surrounding formal gardens with a view to their restoration and extension to create a new Abbeyfield type property. Negotiations led to United Utilities purchasing the derelict swimming pool and some surrounding land for a waste water treatment works and a Coastguard garage was built nearby. The purchase was successful and, eventually, after considerable design and building work, the 'new' Ashmeadow House, now the property of the Crossfield Housing (Arnside) Society Limited, welcomed its first residents in December 2005 with an official opening of the development by the Duchess of Gloucester in the following May.

The Executors and Trustees looked on the exchange with some relief. Now, left with several acres of prime woodland and orchards, together with a sounder financial base, they are able to consider the better management, and possible recreational development, of the area.

In 2020 the property was bought from the Society and developed into one and two bedroom apartments. 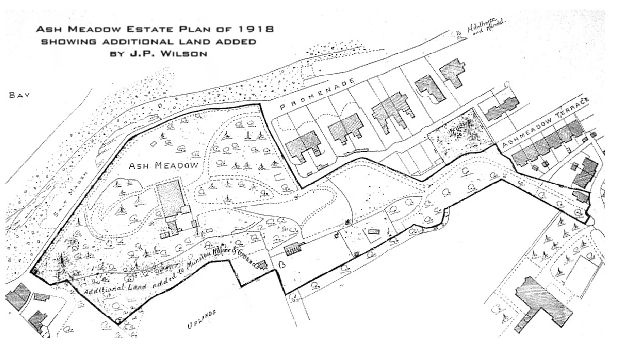 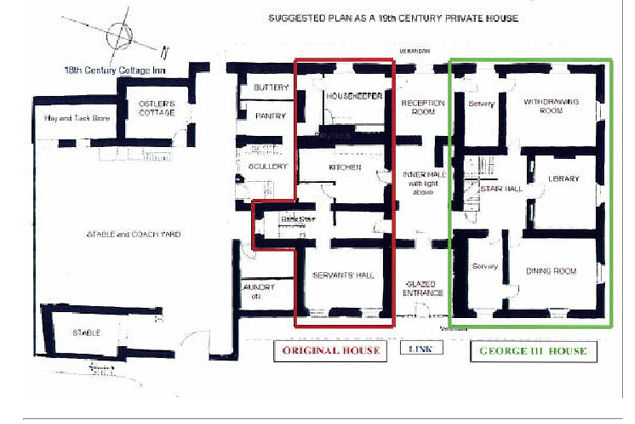